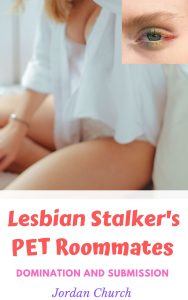 Lauri Hayward, hard studying intelligent campus beauty, was forced to be roommate’s with her lascivious lesbian stalker and was worn down by her into taking an unwise challenge which she lost. This means she has to be her stalker’s dirty live in sex puppy pet for twenty-four hours. Just like the lesbian stalker’s other roommate, Pet Mia!

Now Lauri must face her consequences and Rosalie gets to enjoy the fruits of her wicked plotting and depraved seduction.

Can Lauri get through these taboo twenty-four hours without being forever changed for the much much worse?

Can Rosalie force Lauri to crave this sleazy submission and compel her to submit herself totally to becoming a human sex pet for far longer than a mere twenty-four hours?

Rosalie the lesbian stalker will not be satisfied with a mere twenty-four hours of submissive pet play dark by Lauri. She wants her all the way and all the time. She wants to utterly own her.

Rosalie is full of lesbian lust and determined to erode Lauri’s will and even her humanity and Lauri is determined to keep a grip on herself. Oh, but, it’s so hard to keep a mental grip when a lesbian stalker has a physical grip on your you know where!