You are here: Home / Archives for Adventure

READ FOR FREE ON KINDLE UNLIMITED

They both stood there for a moment staring into each others eyes. Jake moved closer to Jimmy and kissed him softly on the mouth. He was surprised when Jimmy parted his lips, begging Jake to keep kissing him.
When Jake’s tongue entered his mouth he moaned for Jake, his hands going to Jake’s hips, bringing Jake closer to him. Feeling their hard cocks pressing against one another they both moaned against each others mouths.
“I never thought this could feel so good.” Jimmy murmured when he broke the kiss and felt Jake’s cock grinding against his.
“I can show you just how good it feels.” Jake whispered, bringing his mouth to Jimmy’s neck as he began nibbling on his soft, warm, skin.

WARNING – This book contains steamy romance scenes and is not suitable for all ages.

GET YOUR COPY RIGHT NOWThere is a 100% Money Back Guarantee within 7 days of purchase if you are not satisfied with what you have read. Click the BUY NOW BUTTON!

Gwendolyn
When my royal prick of a stepbrother left for Afghanistan four years ago, I was heartbroken. It wasn’t just Tristan’s hard muscles and cocky grin that got my pulse pounding… He was also a duke—or he would be soon enough…

Now he’s back and hotter than ever… And he wants something from me… Something dangerous. Something scandalous.

Tristan
I have a secret. A shameful secret that started with my birth, one that my father was clear must never get out: I’m my father’s bastard. His illegitimate son with a woman beneath his station. Father has never hesitated to remind me of my “low breeding.”

Now he’s remarried and managed to spawn a real heir, and he’s only too eager to be rid of me once and for all.

There’s only one woman in all the world who can help me now.

Get ROYAL PRICK at Amazon

Evil keeps a formidable schedule in Weston, West Virginia. Every seventh year, spirits from the town’s abandoned insane asylum seek worthy souls to command. But this seventh year, a desecration unlike any before is scheduled to ravage the town. And Solomon Gorge is lured to the harrowing event by the screams of Silence.

Partnered with Antonio “Lil T” Minelli, sexy as hell ex-Green Beret turned security and covert ops specialist for Rossi Security, and the last available Decadence Master, Angie must guard her heart or risk losing it to the one man who has the power to make her kneel in surrender. He is also a man who has made no secret that marriage, family and love aren’t for him. Instead, having sworn off relationships beyond the walls of his club, he meets his needs with an available, willing submissive, making it clear up front not to expect more than an unforgettable night.

Thrown together again and again, at work, at play, and in near constant emotionally charged situations, Angie and Lil T fight their attraction, but succumb to their undeniable desire. The chemistry between them is explosive, as is the sex. As Angie falls under the spell of his expertly wielded flogger, her fears come to fruition when she realizes she’s lost her heart and given her love to a man who swears he doesn’t have it in him to give in return. In time, she sees past the fun loving, player exterior to the tortured man beneath. Can she convince him to take a chance, to entrust his damaged heart into her loving hands and try again? Or will he reinforce the shields he’s built over the past decade and push her away, losing her forever?

Get What About Love at Amazon

Eleven stories. Ten of the hottest authors in erotica. More than 75,000 words in length.

This tempting collection of stories was put together with one thing in mind; turning you on. If you’ve got a kink or not, you’ll find something here to set you off. Inside this bundle of carefully-selected stories you’ll discover sordid tales of taboo lust, shifters finding their mates…and everything else inbetween.

Get Flesh: Alpha Males and Taboo Tales at Amazon 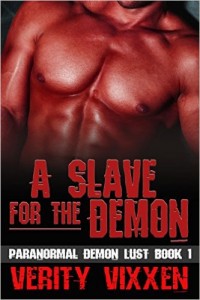 A young slave woman from the mine pits, chosen as a sacrifice.
A demon of insatiable lust.
What will happen when he takes her as his own?

I did not know when I awoke that today would be unlike any day I’d ever known before. Today, I was picked for the Master and freed from the slave pits. I have been chosen as a sacrifice for a demon called forth from Hell. A demon of insatiable lust. A demon who demands utter obedience, inflicts pain, and takes whatever he wants. I will be all his, utterly and completely. I will pleasure him in every way I know how. I want him, more than I’ve ever wanted anything before.

This short story is 8000 words. It is the first part in the three-part series. It does not have a cliff-hanger ending and can be read stand-alone.

Excerpt:
“The glass of the mirror frosted as though covered in ice and then it shimmered and suddenly Master Asim and I were no longer reflected in it.
Instead, there stood a monster, a demon. He was seven feet tall and completely naked. His skin was the red of fire, and his hair was black as coals, with two horns rising on either side of his head. His face was all angles and plains; with high cheekbones and a chin that jutted unnaturally. Eyes, dark and filled with malice, roamed the room. His frame filled the mirror, thick ropes of muscle bulging from his chest and neck, but my eyes were drawn downwards to the giant – – that hung down his leg, the size of a bull’s.
What would that thing look like when erect?
Upon each of his shoulders sat a tiny imp, exact replicas of their master but no bigger than the length of my forearm. They were dwarfed against his enormous bulk. Behind him, I could see only flames and bare rock, and with horror I knew that I must have been looking into the depths of Hell.
The demon came forward and ducked his head. He stepped through the mirror and was suddenly in the room with us. Immediately, I could feel his warmth radiating towards me like flames. I could not draw my eyes away from the demon’s member, swinging as he walked.
“Oh, great Lord!” called Master Asim, though it would seem that here he was the servant. “I have brought you this morsel to satiate your lust!”
The demon turned its black eyes towards me and smiled, showing rows of sharpened teeth. When it spoke, its voice was a booming rumble that thudded inside my skull. “You belong to me now,” he said. “Please me, and I shall give you ecstasy beyond your imagining. But displease me…” His face grew angry, and I quivered with fear and expectation.
The demon stepped closer.
Asim moved away, taking a seat in the chair behind us. I could see the lust and excitement on his face. Whatever was going to come next, he was going to be a spectator and he was going to enjoy it.
“You are to do exactly as I say,” said the demon. “You will not speak, will not make a noise, unless I order it. You shall do nothing, touch nothing, unless I order it. I own you, completely. Understand?”
I swallowed and nodded.
The demon smiled his sharp-toothed, malicious smile. He reached out a single, long, black-clawed finger and touched my shoulder. A burning pain jolted down my arm the moment his nail laid against my flesh. I looked down to see a strange symbol, glowing on my skin where the demon had touched me. The demon pinched the corner of my robe. The dress disintegrated beneath his touch, turning to ash that floated around me as the last tendrils of material disappeared.
I was completely naked and at the mercy of a demon.
“Over there. Hands and knees. Now.”

When Alicia is invited by her father to join him in Upstate New York, she is excited to get away from Los Angeles. While staying in New York she meets a mysterious stranger that she allows to

seduce her. The next day she heads out to the country to join her father on his land and meet the woman he is dating. While there she gets lost in the woods. She’s scared and hours pass into

the darkness. Then she is rescued by an attractive man that works for her father. In the heat of being rescued and wanting to feel safe, she allows him to seduce her. It all seems like wild

abandon until she finds out that both the men that she has been with are the sons of her father’s soon to be wife. She is shocked by the news, but even more shocked that the men knew who

she was. The wicked brothers knew exactly what they were doing. More of the mystery of their past unfolds the longer she stays, making Alicia want to escape.

At the request of Jackson Vaughn himself, Julia has been working at the billionaire’s estate for weeks. In all the time she’s been there, she has never run into a single soul besides staff. One day, after showering off at the poolside cabana, Julia discovers her clothes missing. Her timing couldn’t be worse, because today there’s a special visitor.