You are here: Home / Archives for Chera Zade 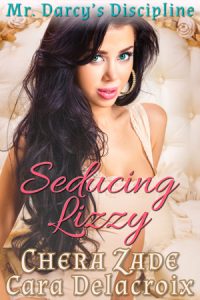 Elizabeth Bennet of Jane Austen’s “Pride and Prejudice” is a blushing innocent when she marries Mr. Fitzwilliam Darcy. Her mother has told her nothing of what to expect on her wedding night, except to instruct her to do her duty. So Lizzy turns to Darcy to teach her in the ways of love.

Though a tender lover, he is a demanding husband. She soon finds herself in a game of disobedience and consequences. Lizzy may be the new mistress of the house, but Darcy is master in the bedroom. In the thrall of ecstasy, she learns that pleasure comes with a price. Join Our Dear Couple as Lizzy gets her first taste of Mr. Darcy’s Discipline.

END_OF_DOCUMENT_TOKEN_TO_BE_REPLACED 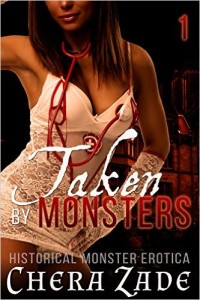 “You will be the home for our seed.”

After a public fall from grace, the duchess Lady Matilda Sandwell decides the best way to avoid attention is to hide out at a relaxing spa hidden away in the countryside during Halloween.

Enthralled by one of the three physicians who own the spa, Lady Matilda believes she’s made the right choice. But there’s more to the spa and the handsome doctor, and Lady Matilda realizes this far too late when her fertile body is taken hard and seeded by an aggressive monster.

Get Taken by Monsters #1 at Amazon