You are here: Home / Erotica / Red Mist by Simon Rosser 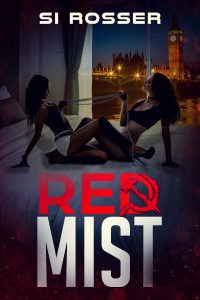 London lawyer, Jack West, has a great job and is married with a beautiful daughter; but his personal life is a mess, and it’s about to get a whole lot worse…

When a beautiful woman, who calls herself Amber, takes a keen interest in Jack over lunch in his local wine bar, Jack does his best to resist her advances. But when she pleads with him to walk her home after two sinister looking men enter the bar, he agrees. This was Jack’s first mistake. His second was entering her apartment.

With only seconds to think, Jack grabs Amber’s bag and flees for the fire escape, dodging a hail of bullets in the process. He is chased across London by the crazed assassins, but who are they and what do they want? Was Amber also an assassin, or maybe a female agent? With only the contents of Amber’s handbag in his possession, Jack sets about trying to piece the life-changing mystery together.

RED MIST is a fast-paced, unputdownable, sexually explicit thriller with terrorism elements that will keep you turning the pages until the very end. If you enjoy espionage books and the action and adventure of a James Bond or Jason Bourne movie then you will love this fast paced gripping, sexy action thriller.