You are here: Home / Archives for Cowboys

In the years since the tragic death of her parents, Jedda-Lyn Cross has given everything she has to keep the family ranch running. She has grown accustomed to getting no help at all from her alcoholic brother, but when his violent, sadistic friend tries to make Jedda his wife against her will, it is the last straw.

Her attacker is the son of the richest family in the area and the corrupt sheriff stands ready to do his bidding, which leaves Jedda with no alternative but to get out of town in a hurry. With no money and no horse, her best chance of making her escape comes in the form of a soon-to-be-departing cattle drive led by the famous trail boss Wes Jordan. But a young woman has little hope of gaining employment on a cattle drive, so drastic measures are required…

Wes is none too pleased when he discovers that the new drover he hired is actually a beautiful twenty-two-year-old woman disguised as a boy, but after hearing Jedda’s story he promises to protect her. As he quickly realizes, however, that will be easier said than done. Jedda is sassy, headstrong, and in serious need of a good, hard, bare-bottom spanking, and when her reckless disregard for her own safety finally pushes him too far, Wes takes her firmly in hand.

After a painful, humiliating punishment from the handsome trail boss, Jedda is left with her bottom burning and her mind set awhirl. In spite of everything, she aches for Wes to take her in his arms, and when at last he does the pleasure of his skillful, passionate lovemaking nearly takes her breath away. But with her obsessed former suitor and his hired guns still after her, can she bring herself to accept the fact that, for a man like Wes, risking his life to protect the woman he loves is just part of what it means to live by the code of the west?

Penniless and out on the street, Hope Lee turns to the only place she can find work, the brothel. Trying to put her best foot forward, she convinces the Madame to give her a chance. With the contract signed, Hope finds herself the property of Madame M. But when the Doc comes by for her examination, she can’t control her temper long enough and winds up over his knee, with the prospect of a job looking worse than it ever has before.

Clint and Madison have a feeling there’s something different about the town they just rode into, they’re just not quite sure what it is. They quickly find out what their hunch is about when the hotel is full and they’re told to look for beds at the brothel. One glimpse of Hope and the men know she’s to be their bride, all they have to do is convince her of it.

Realizing that she’s got a gal with too much sass on her hands, Madame M is only too happy when the two rugged cowboys offer to take the fiery tempered new girl from her.

Soon Hope finds herself the object of not just the stern men’s affections, but also their discipline as they begin to show her what it means to be a Red River bride.

Get Love Under Two Drifters at Amazon 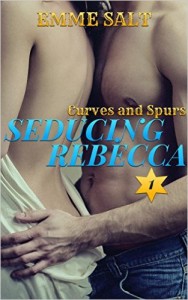 Fort Charles has a reputation for sin. All her life Rebecca’s heard the rumors that the cowboys there made a custom of sharing one woman between two men…and now she’s about to find out the truth.

Abandoned by her fundamentalist Mormon father for refusing to marry her sister’s husband, Rebecca has no choice but to work as a cook for ranch owner Carl Lawson and his fiery right-hand man Jamie Briggs.

Beautiful, voluptuous Rebecca is intent on preserving her virtue but can’t seem to resist the pull of the rough, masculine duo…or the wicked traditions of Fort Charles.

The kiss was harder now. I could feel the hot length of his body, holding me in place.

“You’re ready for it,” he murmured. “Aren’t you, Becky.” His body pressed into mine. “Ready to be kissed…ready to be touched.”

“God, aren’t you ripe,” he muttered into my ear. His lips skated over my jaw. “Not sure if I can wait like we planned to…I was never the patient one…”

Click on the cover to Look Inside for a red hot preview!