You are here: Home / Archives for Renee Rose

She enjoys her new identity, so far removed from the prim governess she’d been, but she longs for a real daddy–one who is kind and caring, yet willing to administer real discipline. When she spies Culpepper Cove’s Mayor interacting with his young niece, she knows he’s just the sort of man she wants. But his disdain for her and her profession put them in conflict.

Letting go of her little self, she reverts to the proper, fine-mannered governess to win his attention. But at what cost? With her little side squashed, and no hope of being accepted in polite society, she hardly knows who to be or what kind of life to lead. Is being the Mayor’s wife enough?

About The Red Petticoat series:

The Red Petticoat Saloon series is a collection of books written by #1 and USA Today bestselling authors. Each book tells the unique story of a different woman, ‘a gem’, who comes to the saloon to find a safe haven and discovers they become part of a family. Recurring characters appear in each book to allow readers a continuity as they learn about the women who have learned to bend but have not broken under the harshness that life has to offer. It is a series where strong, loving men find not only entertainment at the saloon but the special women who reside under its roof.

Get His Little Lapis at Amazon

When a graduate student sees her hot professor, thesis advisor and employer at a spanking party, she promptly runs and hides. Later, kicking herself for her cowardice, she realizes she missed the opportunity to bring her spanking fantasies to life and vows to seduce the hunky scientist. He ignores her antics until she accidentally ruins his research experiment. Then he bends her over his desk for a dozen strokes of the cane.

Dr. Todd Daniels would love to get involved with his smart and sexy lab assistant, but doing so would be unethical and risk censure from the university. Still, when she deserves a serious spanking, he delivers. Delving into a flaming hot love affair, they must hide their relationship and navigate department politics, a search for his child, given up for adoption years before, and Lucy’s insecurities about his commitment. He wants to make it all work, but he isn’t sure if their unbalanced power dynamic has longevity as a relationship. In the end, all mentors fall off their pedestals and students must spread their own wings.

LuAnn’s had a crush on her older, rebellious stepbrother since the year he lived with them—his last year of high school. Now, four weeks before graduating from Sarah Wharton Women’s College, she’s been kicked out for having boys in her dormitory, and he’s the one who shows up to collect her. With her parents away in Europe, he brings her to his place, because leaving a young woman unchaperoned isn’t done in 1957.

Brad makes it clear she is not to emulate the wild behavior of his youth, and he starts things out with a long, bare-bottomed punishment. Soon, though, he discovers his stepsister is all grown up, and having her under his authority makes her a temptation too delicious to resist. Before long, he’s strayed way past what is acceptable, turning her into his little girl and bringing her to the peaks of pleasure during her numerous punishments.

LuAnn brings out the dominant side of him, but with it comes the desire to take care of her and nurture the sweet innocence she’s been trying to cover up. He wants her for keeps, which means risking their parents’ disapproval and leaving his rebellious side behind forever.

***This novella was originally published as part of the Correcting the Coeds 1950’s spanking romance box set.***

Publisher’s Note: The book contains spanking, elements of ageplay and graphic sexual scenes. If such content offends you, please do not buy this book.

Get Stepbrother’s Rules at Amazon 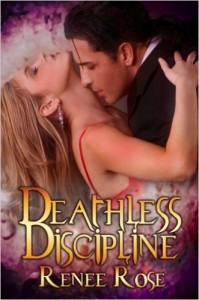 Not this time. Dom feels that he must lay down the law when Kate not only stays out much longer than she planned and doesn’t answer his calls, but also lies to him about it. There’s only one thing to do—give her a long, hard, bare-bottom discipline spanking that she will not soon forget.

Follow these characters from Renee Rose’s full-length novel Deathless Love as their relationship continues to grow!

A bonus short story called Mary Catherine Learns Her Lesson is also included, which takes place at the No Return nightclub featured prominently in Deathless Love.