You are here: Home / Archives for Rock Star 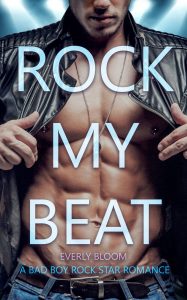 About Rock My Beat:

-Jimmy Sharp-
It only took one look for Jenna to break all my rules. When she wiggled out of that dressing room in nothing but a leather belt as a skirt, it wasn’t her lack of clothes that caught my attention, it was her. She could have been dressed as Santa Claus, it wouldn’t have made a damn difference, because she’s the one – My one. All my life I’ve lived for the music, carefree and answering to no one – until her. I will do anything for her. If only she would just give me a chance.

-Jenna O’Hare-
I’m an idiot. A gobsmacked fool. I let my hormones run away with me and had the most intense one night stand with world famous rock star, Jimmy Sharp. Just when I thought there might be something more than lust brewing between us, I accidentally caught a glimpse into his private life. He’s absolutely crazy if he thinks I’ll be ok with his lifestyle! There is no way I could realistically be with someone like him. I won’t – I can’t – let myself get sucked in. I just know he’ll break my heart if I do.

For Addison Beltrand, PR rep for Bold International, Inc. climbing the corporate ladder is all that matters in life. Her hard work is finally rewarded with the promotion she’s worked her ass off to earn—but the gig comes at a price. She leaves in two days for a twelve-week tour with America’s hottest alternative rock band, 69 Bottles.

Talon Carver, lead singer of 69 Bottles, has no problem with women–as long as they’re gone by morning. When Addison shakes up his world, it’s a huge problem—compounded by the fact that Addison’s not the only one he wants.

Kyle Black, manager of 69 Bottles, has a secret. He and Addison are closer than she thinks, but telling her could keep her away. When Talon sets his sights on Addison, Kyle uses his secret to push her into Talon’s arms, only to discover she isn’t the only one he needs.

Talon and Kyle push their boundaries and Addison’s, but can they throw their reservations to the wind and claim her together?

Two men. One woman. A rock band. A tour bus. One Wild Ride…

****Content Warning****
Sexy, naked, bisexual rock stars…and a lot more…
This book contains, but is not limited to the following sexual content – reader discretion is advised – hot sex between two men and one woman. M/M/F, M/F/M, M/F, F/M and M/M sexual content. There are no boundaries when these three crash together, as long as you’re over 18 years of age.