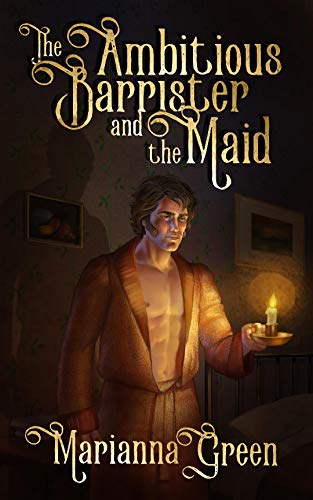 About The Ambitious Barrister and the Maid:

Young Sarah-Ann Jenkins, forced into becoming maidservant to a handsome, ambitious young barrister by her penny pinching relatives, decides to become his mistress.

After all, he has had his eye on her from the first, and she wants to make enough money to secure the future for her beloved but eccentric brother.

It is a practical arrangement. Sarah-Ann is well aware that Mr. Grand is a fortune hunter in search of a wealthy wife. Still, in the maid and the master discover such physical rapture together that they are reluctant to give it up easily.

And when she has reason to believe that someone in the household is plotting against him, her sense of justice brings her firmly down on his side.

This steamy romance, which has in it echoes of the Charles Bravo Balham mystery, is set in the mid Victorian UK at a time of massive social inequalities and sexual repression for women, is written as dark comedy and will delight readers who enjoy an historically accurate sensual read.

For over eighteens only.

Editorial Reviews
Review
Alex (Briennai) Goodreads review: rated it really liked it
I love historical romance stories, and so I was excited to read this story. I definitely wasn’t disappointed.

Sarah is a good maid. She listens to the head maid Mrs. Carr, and she listens to everything that Mr. Grand says. When Mr. Grand takes a liking to her, she doesn’t hesitate to fall for him. It is improper for a maid to fall for her master, especially when he is an eligible bachelor looking for a rich wife to marry. He needs this rich wife to save his estate, but he can’t seem to stop falling for his maid.

I thought that this book would be just an adult historical romance, but then I realized that it was going to be a bit different. For starters, Sarah was 17 at the start of the novel. At first, I thought that it was weird, but then I realized that she was probably old for an unmarried girl at the time.Mr. Grand never forced her into anything, he just knew that he liked her and she reciprocated his advances. The start of the novel was more focused on sex, but then things got even more interesting as the story progressed.

Sarah and Mr. Grand were together, but they started having feelings stronger than lust towards one another. The main conflict of the novel was when they were discovered and they were battling with others and with themselves to figure out what would come next in their lives. This novel may be steamy, but it does have a plot, and that plot can truly draw you in.

The only thing that I have to say is that it took me quite a bit of time to get to know and enjoy the characters. It may have seemed at the start that Mr. Grand was cold, but he fell for Sarah quickly in this short story. Then, the rest of the story seemed to fly by, and I was left wanting more. If only this was a series so that I could learn what happened to the other characters in the household in more depth! The story was short enough for me to read in one afternoon but long enough for me to be sad when it was over.

I would definitely recommend this steamy historical romance novel to anyone looking for a new adult book to read.
I received a copy of this book and this is my voluntary review.