You are here: Home / Archives for Cross dressing 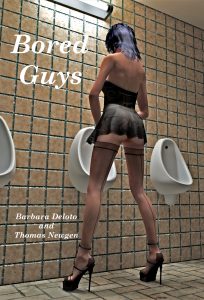 About Bored Guys: – A Couple of Bored Guys Get Cross Dressed and Turn into Fully Feminized, Sissy Faggot, Tranny Sluts:

Bored guys who are never bored again?
Experience what a couple of bored guys did to make their life more interesting. Feel what they felt when they dove headfirst into the steamy, hot world of crossdresser sex and feminization when they decided to make themselves into the perfect avatars of women. Feel the sensations when they first dressed and got fully feminized. Live their experiences when they realized they were becoming sissy faggot sluts that couldn’t stop satisfying other men – tranny babes that use male chastity devices, the way cuckolds and their hot wives do, to keep their cuckolded males libido high and prevent the inevitable release. Transvestites that were so dedicated to becoming perfect in their transformation, that they didn’t miss a thing and transformed so well, that real men desired them and fantasized over them, along with other things, over them, on them, and in them, in the process.

When their good time is over will they revert to what they were, or will they forever be changed into submissive feminized sissy faggot sluts by their experiences into the sensual and sexual lives they created for themselves?

Read about it and dream about it, in this highly explicit, X-rated for adults only, tale not of forced feminization, but willing male feminization, done by men that chose to. About 26,000 words and 110 or so pages of bored guys becoming hot, sexy, shemale sluts.

END_OF_DOCUMENT_TOKEN_TO_BE_REPLACED 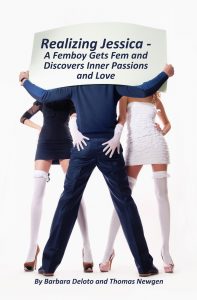 About Realizing Jessica: A Femboy Gets Fem and Discovers Inner Passions and Love:

Never fitting in with other boys, never quite feeling right about himself, a femboy, Jessie, is introduced to a new way of looking at things. His gorgeous, intelligent, roommate Shelly takes the bull by the horns, so to speak, and turns the femboy into a gender he can identify with as she crossdresses him and feminizes him into something he never dreamed he could be.

Through the use of male chastity and various other methods, Shelly makes Jessie see why he should be Jessica. They meet a rich, handsome LGBT supporter and open-minded man who sees them as his ideal women, and the three of them discover a new way to live.

Enter the dream as femboy Jessie becomes fully feminized as Jessica and is immersed in a world that fits better than it ever had before. Paradigms are broken, and a new and intoxicating world unfolds in a steamy and sensual tale of discovery for these new adults finding love and fresh experiences in this very hot, gender-bending, LGBT romance.

END_OF_DOCUMENT_TOKEN_TO_BE_REPLACED 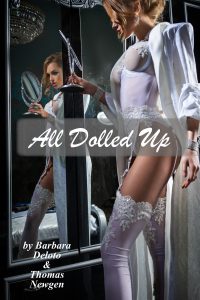 About All Dolled Up: A Student Gets Fem – An LGBT Romance:

A gender-bending mathematician?
A student working on a PhD in mathematics takes a suggestion from a female psychiatrist friend that he’d present himself better as a girl than a boy. He cross-dresses as a woman as precisely and accurately as a mathematician would. In his world of black and white, where equations are solvable and yield a result, he attempts to make sense of the unexpected variables this crossdressing transformation creates. Maybe he can arrive at an algorithm for it and find answers to what the future will be for him.

Will his newfound sensuality, persona, more intimate relationship with his psychiatrist friend, new interest in men, increased desires, and more exciting and fulfilling relationships, lead to fulfillment that he can predict, or will it lead to confusion and a future he never would have imagined?

Should he simplify his life’s equation by once again presenting as his male gender, or continue on to discover if the confusion is resolved in his new, feminized, cross-dressing, gender-bending self?

Enter the world of a cross-dressed and feminized male and see if his equation can be solved and the future predicted for the new ‘gurl’ in this short-read, new, adult, LGBT, hot and steamy transgender romance.

END_OF_DOCUMENT_TOKEN_TO_BE_REPLACED 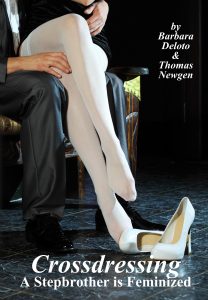 About Crossdressing – A Stepbrother is Feminized:

What happens when a guy is caught dressed in his stepsister’s clothes?
Pat is awakened to a new world and brought to question what defines his gender, sexual preferences and self-image when his stepsister Shelly feminizes him and turns him into her sister. She teaches her crossdressing girly-boy new ways to experience life and sex. His life becomes far more exciting than he ever would have imagined as they both pleasure manly men and each other and become intimate with another feminized male. A chastity cage for Pat helps to drive the feminized male to unthinkable and undeniable desires. Join them in their unfettered new world and see if this feminization results in a permanent gender-bending or just a temporary foray in this new, adult, x-rated transformation fantasy.

END_OF_DOCUMENT_TOKEN_TO_BE_REPLACED 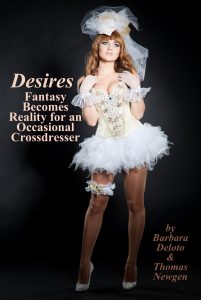