You are here: Home / Archives for Dystopian

Isabella Martin was born a hundred years after an economic crash, which changed the whole world. Countries fell, and others rose up in their place. Debt is now genetic. There is no escaping one’s family without special dispensation.

With the help of a few patrons, the government began a Program which oversaw private contracts between the rich and the poor, contracts that would pay off chunks of debt, or even allow a person to remove themselves from their family and hold a private debt.

Each contract has very clear terms dictating what is to be expected of those who sign it. Each one has several escape clauses. The government employed private workers to check in on the contracts to prevent abuse of power.

Isabella was a tomboy. She worked as a labourer alongside her father and brothers until she was hurt in a workplace related accident. The other skills she developed in the slums were not exactly marketable, leading her to the Program building in search of a contract to bring her family’s debt down any way she could.

She was presented with a ‘blank slate’ contract. No rules, no guides, no escape.

This is her story.

END_OF_DOCUMENT_TOKEN_TO_BE_REPLACED 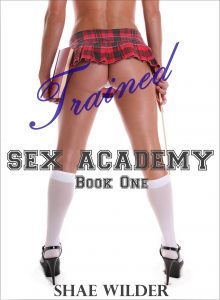 As a virgin, Brie Selby knows nothing about sex. But she knows it will become her life’s work.

Life for women isn’t easy under the New Government. Ever since a global virus left most men sterile, women have been relegated to two roles: either they can become breeders with the immune Fertile men to continue the population, or they can become Courtesans who provide sex to the rest of the males in the society. For Brie, the choice was always clear. The last of sixteen children, she vowed never to become a breeder. On her nineteenth birthday she receives her acceptance to the Harveston Academy for Young Women, otherwise known as the Sex Academy. Here she will be trained to become a Courtesan under the tutelage of the male faculty.

To help her learn, she is partnered with Trent Baylor, the resident assistant from her dormitory floor. Together with the professors, Trent guides Brie and teaches her about sexuality and sensuality. But has she learned enough to pass her first exam where she must lose her virginity to the highest bidder? And how will her relationship with Trent survive the test?

END_OF_DOCUMENT_TOKEN_TO_BE_REPLACED 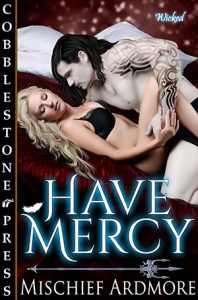 Sister Mercy was raised with a dull, passionless life behind clergy walls. Her mysterious background and secret love of sinful underwear make her a complete misfit—and the perfect sacrificial lamb for Arioch, a fearsome Hybrid. When she is caught snooping through his belongings, she fears certain death. Instead, she finds herself stripped bare and subject to the handsome beast’s commands.

END_OF_DOCUMENT_TOKEN_TO_BE_REPLACED

Book Three of the BEYOND series, and winner of a 2013 RT Reviewer’s Choice Award.

A woman with no future…

Live fast, die young–anything else is a fantasy for Six. She’s endured the worst the sectors had to throw at her, but falling in with Dallas O’Kane’s Sector Four gang lands her in a whole new world of danger. They’re completely open about everything, including their sexuality–but she hasn’t survived this long by making herself vulnerable. Especially not to men as dominant as Brendan Donnelly.

A man without a past…

In Bren’s arms, Six is finally free to let go. But his obsession with the man who made him a monster could destroy the fragile connection they’ve forged, and cost him the one thing that makes him feel human–her love.