You are here: Home / Archives for mfmm 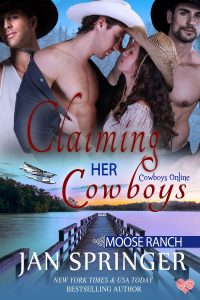 Jennifer Jane (JJ) Watson spent ten years in a maximum-security prison.
The last thing she expected was to get an early release, along with a job on a remote Canadian cattle ranch caring for three of the sexiest cowboys she’s ever met!
*
Rafe, Brady and Dan thought they were getting a couple of male ex-cons to help out around their secluded ranch, but instead they get an attractive and very appealing female.
In the wilds of Northern Ontario, female companionship is rare so it’s a good thing the three men like to share…
*
They’re dominating, sexy-as-sin and they give JJ the hottest ménages plus one adorable baby!
But her second pregnancy comes as one giant surprise, and JJ’s anxiety overwhelms her when she doesn’t know who the father is.
Is it Rafe, Dan or Brady?
Spring days on this ranch are bursting with hard work, danger and emergencies but nights are filled with scorching passions and naughty pleasures as JJ lays claim to her three sexy cowboys.