You are here: Home / Archives for transgender erotica 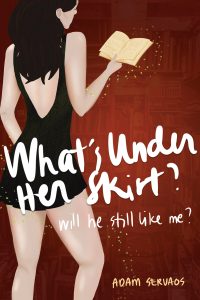 About What’s Under Her Skirt: Will He Still Like Me?:

A Wholesome, Spicy, and Realistic LGBTQ+ Romance That Will Get Your Heart and Body Warming – The Perfect Read for Those Who Need a Little Romance in Their Life
I loved who I was. I was comfortable — mind, body, and soul.
I knew who I was and that the genitalia between my legs didn’t make me any less of a woman than the females around me. I could also wear skirts and walk around freely and none would be the wiser, until… you know.
But, that wasn’t an issue. Usually.
I moved to town about a year ago and my sweet supportive co-worker had been working her ass off trying to set me up on a date. From ‘sophisticated guys’ who liked lemon in their whiskey to guys who she thought were just absolutely ‘perfect’ for me. (Spoiler Alert: they never were.)
“It’ll be fun this time! I promise!”
I gave her a flat look and remembered all the horrendous dates she’s set me up with. Not until I see him walk into the bookstore. Hearing the soft tinkle inkle link of the bells and watching him step through the door, any signs of a frown would disappear from my face and cause me to swell up under my skirt.
I didn’t think that by the time I’d hear the second tinkle inkle link of the bells, I’d have secured myself a date with the town’s hero — Less, Mr. April of the fireman’s calendar.
I also didn’t think that I would have anything to worry about when it came to him. Except… he didn’t know what I had under my skirt.
What’s Under Her Skirt is a fantastically funny, yet realistically romantic LGBTQ-friendly romance. Of course, it isn’t without its spicy moments that will leave you out of breath. Come alongside Eda, a woman who’s comfortable in the body that she was born in, as she tries to navigate life and love.

END_OF_DOCUMENT_TOKEN_TO_BE_REPLACED 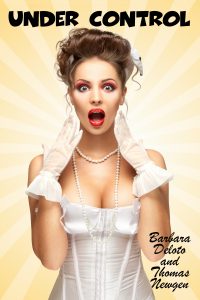 About Under Control: An LGBT, Crossdressing, Feminization, First-Time Romance:

A male who is feminized and redesigned to serve men?
Bored with his life, Alex looks for a new job and finds the opportunity of a lifetime in an advertisement that promises a purposeful life, fulfilling the needs of others and never wanting for anything. “You’ll be passionately motivated to achieve what you’ll be designed for and may even find the love of your life. Everything in your life will be under control. Set up an appointment to change your life now.”

Little did Alex know what would happen to him or what he’d be designed for when he signed the papers. He is almost completely feminized, with an enhanced nervous system and a remote control for others to use to control the newly feminized male in order to serve men. Unfortunately, her memories of who she was before weren’t wiped out as they were supposed to be, and yet her programming to serve men took hold.

What will she do? If she’s found to be imperfectly programmed, she’ll be terminated. Her previous male self was straight, and now she can’t be. Will the advertisement ever become true for her? Will she be motivated, find love, and be under control by others, or will she end up in control and happy?

Enter the world of a crossdressed and feminized male and see if there is any chance for the new ‘gurl’ in this short-read, new adult, LGBT, hot and steamy, transgender romance. Look inside now.