You are here: Home / Archives for Vampires 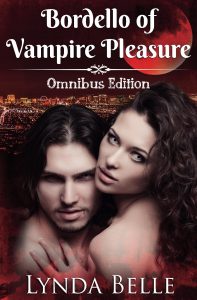 About Bordello of Vampire Pleasure:

His ex-wife has screwed him.

Now, his friends are treating him to a brothel hook up to help him forget. But vampires? Really?

Newly out of the undead closet, vampires are now members of the 21st century. But can one special vampire help John forget the horrible pain of his wife’s affair? He’s going to get schooled in the ways of vampire pleasure even if it’s the last thing he does.

Natasha was looking for a way to forget her ex-boyfriend.
She found a vampire.

The vampire bordello was just outside of Vegas, and a short drive from her hotel. Could the perfect vampire help her forget her latest man mistake? One fantastic night of secret fantasies will prove to be not only unforgettable, but the answer to what she was looking for, true love.

Will a promise of true love be the sacrifice needed to save them both? Will they survive the night together? No one should ever underestimate love. Even vampires.

The series readers are describing as “sexier than True Blood.”
Vivian thinks she can control every aspect of a deadly game with her usual manipulations… but what if she can’t?

Seven vampires and seven werewolves pay to hunt a supernatural criminal across the cold, vast grounds of an Alaskan resort. The one to catch her, and live through the encounter, will increase their power by feasting on hers.

The tiny vampire they track is more than she appears, however. To escape a fate of twelve years in silver chains, she’ll do anything to survive the weeklong excursion. This time, the darkness holds more than just the stinging bite of the Arctic—it holds death.

Journey along, in this next installment of The V V Inn series, for a wild ride as the tale is told through the eyes of all the new seethe members.

Warning: This book contains adult content (bloody violence, graphic language, and explicit sex) and is not intended for readers under 18.