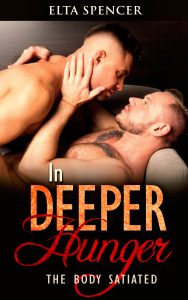 About In Deeper Hunger:

Sam visualizes having Ethan in his arms, and wants so badly to get in bed with him. Sam has had his eye on Ethan for a while, too. Ever since Ethan and him met in class, Sam always had an affection towards him. Ethan’s smell and his crystal blue eyes had Sam entranced from the moment that he met him. Ethan said he was bisexual, well, now its time to put it to the test.

Now that Ethan has broken up with his girlfriend, Sam wants that affection to become more than what it should be and decides to take a stab at making their friendship sexual. Sam is intent on getting in bed with Ethan, but is taken by surprised by Ethan’s initiation. Sam is introduced to a whole new side to Ethan and things go in deeper.

Excerpt from the book: “Ethan and Sam’s eyes met. They stared at each other for a while. You could hear their breath quieting down. The clutches they had on each other were releasing slowly. The maddening sound of the blood rushing to their heads began to subside. All was being replace with a quiet depth, like the deepest of oceans.”