You are here: Home / Archives for Sports

Jamie has a reputation in the NHL: good blocker side, better glove side. People say he’s impossible to score on, and, above all else, a jerk.

Jamie doesn’t care. He hasn’t become an NHL superstar but worrying about what people say about him. There’s only one thing he cares about: the Cup. This year, his chances are looking good, and he doesn’t care who he has to piss off to win it.

But there’s no one who can piss him off quite like Oliver Bouchard, an infuriating winger with a big mouth who’s totally got Jamie’s number. When Oliver is traded to Jamie’s team in a shocking mid-season move, Jamie realizes something even worse: not only is Oliver a grade-A trash talker, he’s also kind of hot.

If he wants to get to the top, Jamie has to try and grit his teeth and make nice. But this time his arrogance might just get the best of him once and for all, and bring his whole team down with him.

**This 68,000 word M/M sports romance novel has a few steamy scenes, a HEA, no cliffhangers and is a standalone. Shot on Goal is Book 2 in the Highlight Reel Hockey Romance Series.**

Get Shot on Goal at Amazon

I do whatever I want, when I want to. Chasing women doesn’t interest me. Not with the responsibility of running the famed Delancey Stables falling squarely on my shoulders. Until I meet her. Or rather, until she slams into me hollering about some tree that’s on the border between our property lines. Oh yeah, my new next door neighbor is hell on wheels.

She’s feisty, argumentative and the best looking woman I’ve ever laid eyes on. I’d like to lay other parts on her too- just enough to get her out of my system. I tell her so, but she takes offense. No woman has ever turned down a Delancey and I’m not the kind of man who backs down from a challenge. Especially since I can’t get her out of my mind.

The longer it takes to win her, the more I want to keep her for myself. I’m the man for her, if only she could stop picking fights with me long enough to see it. I’ll make her mine, if I have to drag her to hell and back again.

The way things are going, that might be a possibility.

This book has THREE complete novels with guaranteed HEA’s and no cheating!

Get RIDE: The Complete Delancey Brothers Trilogy at Amazon

Retiring from the NFL was the right decision, and at thirty years old, I’ve done things most people could only dream of. After all I’ve accomplished, coaching high school football should be easy…but when you’ve got a distraction in the form of a nerdy girl with curves, things can get complicated.

I didn’t know what desire was until Megan. I had no idea obsession could drive someone insane, until I saw her. I wasn’t prepared for the fact that once I laid eyes on Megan my life would really begin.

I have to have her, no matter what the cost. I have to breed her and bind her to me so tightly she can’t ever get away. She’ll be mine, even if I have to take her.

Warning: this book is ridiculous, over the top, completely unbelievable, and pretty much just about breeding the heroine. If you’re okay with that, welcome to my dirty, dirty book! Just remember, I warned you.

Get Coach at Amazon

For three years, I’d lusted after Jericho, my brother’s best friend and quarterback of our college football team. He’s never paid me any attention, considering me nothing more than a little sister he never had. Now, I’m starting freshman year and I’m sharing a suite with my brother. Jericho is over all the time, but he’ll never see me as anything other than the shy girl he met three years ago. But that’s not who I am. Not really. To get over Jericho — and to finally get off — I’ve arranged a meeting with HardcoreDom. If I can’t have Jericho, I’ll give myself to a man who will master me, force me, and dominate me the way I desperately need.

Warning: This book contains situations involving forced seduction and dubious consent. If these are triggers for you, it’s likely best for you to avoid this story. If not, get the popcorn and enjoy.

Get Forced by the Quarterback at Amazon

Something For Your Every Desire: Military, Billionaire, New Adult, Cowboy, Paranormal,
Biker, and More!

1. Seized By The Soldiers
2. Pleasing The Help
3. Her Hot Revenge
4. Her Twisted Desires
5. Throttled To The Max
6. Her Deadly Attraction
7. Alleyway Passions
8. Her Wicked Touch

The goal doesn’t count until it crosses the line.

Captain of the Dartmouth Cobras hockey team, Dominik Mason, believes his team can make a damn good playoff run. He and his men won’t stop fighting until they win the ultimate prize. There’s no doubt when it comes to The Game.

Off the ice, there’s nothing but uncertainty. His life has been in a holding pattern and it’s time to move on. Which might be easier without the lifestyle that has lost its appeal. As much as he loved training subs, he’s tired of giving his all only to go home alone.

Tragedy once brought him closer to Sahara Dionne, the exquisite, yet fragile Ice Girl, but when her abusive-ex darkens her path once again, Dominik can’t help but wonder if his friendship might not be the best thing for her.

But she craves his touch, his dominance, and his possession. Everything he desires is finally within his reach.

All he has to do is take the shot.

Get Goal Line at Amazon

What happens when a first-time dominant and submissive come together? The answer is a great deal of heartache. This is not a romance; it’s a story about one person’s need to control and dominate another.

Brendon is an AFL footballer who advertises on the internet for a submissive. Suzie, a secretary at Homicide Squad, is curious and answers his ad.

Suzie has left Brendon for the last time, again running straight back to Jason. But this time Jason wants to be more than just a friend – he wants to be her Dom! Time On sees Brendon go to extreme lengths to sway Suzie from being with Jason. In addition, due to the restraining order Leon Graham switches his attention to Suzie’s friend, as another way of reaching her.

Suzie will finally decide who she wants, once and for all. Will it be Brendon, who has her heart or will it be Jason, who wants to steal it for himself?

This novel is part of the Playing the Game: 4 Quarters of Submission series.

Standing barefoot before him I only came up to his chest, so clutching the soap tightly I managed to smear some suds over the front of his shoulders. Then working lower I lathered his hard muscular pecks. I glanced up to see him checking me out with a half-smile on his lips, probably seeing that I didn’t miss a spot; there was no chance of that!
I moved on to wash under his armpits before tackling each long arm. After spending some time on that flat rock-like stomach, I took a step back.

“You haven’t finished yet.” He looked down and I knew what he was referring to.

“That part looks really dirty, I think I’ll leave it ‘til last.” I gave him one of my sexiest smiles.

He laughed warmly even as he slowly spun around for me.

It sounded like he enjoyed the way I was massaging the curve of his lower back. I lingered at this spot for a while, tempting and teasing him. I heard his indrawn breath as I slowly moved the soap down over his firm bottom. It felt like there wasn’t even an ounce of fat under my hands; it was all muscle just like the rest of his perfectly sculptured body.

Get Time On: Elimination Final at Amazon 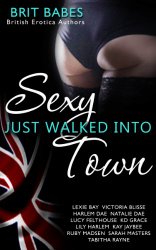 Ranging from sweetly vanilla to so-hot-it-will-blow-your-mind, the Brit Babes aim to please in every literary fantasy department. Their heroes are strong, determined and soul-achingly divine and their heroines sassy, sexy and not afraid to grab what they want. Passion and pleasure is the name of the game, romance and raunch a top priority and it all comes with a delightful sprinkle of kink.

With a whole host of awards, best-sellers and accolades between them, the Babes just know you’ll find something in this anthology that will keep you turning the pages and squirming on your seat. Then, if you like what you read here, check out the individual authors’ websites to investigate their collection of published works. Also visit the Brit Babes’ home on the web which acts as a library for the hundreds of books published by them. Tell your friends, spread the word, because one thing you can be sure of, is when the Brit Babes arrive, sexy has just walked into town!

And please, if you enjoy this anthology, leave a review. The Babes will be forever grateful.

Tucker had only one aspiration in high school – to get the hell out of town the second that diploma was in his hands. The only way out was his talent as quarterback on the gridiron. And his plan worked. He turned pro his sophomore year of college and never looked back. Never had any regrets.

Except her. Lela and Tucker’s romance had been like a force of nature – steamy, unstoppable and tempestuous. He had always turned to her to forget about how bad things were at home, but when things took a turn for the worse, he broke it off and ran. For twelve years he stayed far away, unwilling to deal with his drunken father, his mother’s death, and unable to face the girl he never stopped thinking about.

When Tucker gets a call that his high school coach has suffered a heart attack and needs help, he has to make a decision. Does he return with his teammates to help his beloved coach? Does he take the risk of running into his father? What does he say to Lela about the way he disappeared so completely?

And what if the spark that flared so hot between them still exists?