You are here: Home / Archives for Viking 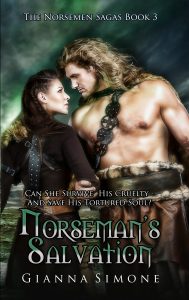 * Can She Survive His Cruelty – And Save His Tortured Soul?*

Jolinn Gallarsdottir has trained hard to become a fierce shield-maiden. Hoping to impress Brosa Sorensson with her skills, she seduces him when he is vulnerable, in an attempt to win his heart as well.

Wracked with guilt over his failure to save his men, Brosa has spent many months attempting to restore his honor and once more gain the blessings of the gods. The goal is pushed farther out of his reach when he beds Jolinn, tarnishing his reputation further. He vows never to let it happen again, though he cannot escape his thoughts of a dark-haired temptress with a sexual appetite to match his own.

When Jolinn’s request to go raiding with the men is rejected, she stows away, disobeying her father’s orders. As punishment, she is given to Brosa as his slave. Vowing to prove her worth as a warrior and his equal, she defies him at every chance.

Determined to dominate Jolinn and bend her to his will, Brosa soon finds himself enjoying her fire and their battles lead to more passion. But when the gods ask him to make the ultimate sacrifice, will everything between them be destroyed?

** Contains A Kinky Twist on History! love scenes, including bondage, spanking and more!