You are here: Home / Archives for slegend 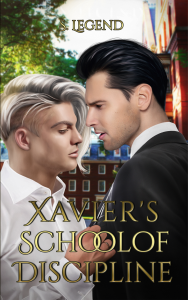 About Xavier’s School of Discipline:

Finnegan Brighton is twenty-seven, has never moved out of Dad’s house, can’t keep a job and has to rely on his brother for continued food and shelter. In a bold move, he ships himself off to one of those new, fangle-dangle, discipline schools hoping to turn his life around. But it’s not just a whim, he’s finally answering a calling inside of him, one he’s ignored until now. The school turns out to be more than he bargained for, giving him a family of men just like him, who want to teach him that he can love himself enough to have everything he’s ever wanted. He just has to do the one thing he’s never been able to do: Surrender.

Xavier is the school’s unyielding headmaster and founder. Oh, and he happens to be interested in the one Finnegan Brighton. Surely with the forces of the strict headmaster and Finnegan’s affectionate, if overzealous domestic discipline family, he can overcome himself, his own worst enemy, and surrender to who he is inside, right? Or will his crushing self-doubt chain him to old patterns forever?

Either way, much spanking ensues! A polyamorous love story with brats and Tops.